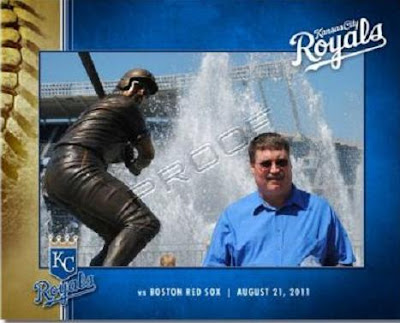 The kid had his good stuff Sunday, Ned Yost noticed, and his good command, too.

Despite yielding a leadoff walk — in which he kept trying to make the perfect pitch — Danny Duffy escaped the first inning of the Royals’ 6-1 loss to Boston unscathed. But Yost, the Royals’ manager, still wasn’t going to let his rookie left-hander overthink this. Not when he was matched up against one of the best pitchers on one of the best teams in the American League.

“Danny,” Yost told Duffy in the dugout, “let everybody play. You don’t have to strike everybody out.”

Duffy had heard the whole “pitch to contact, trust your defense” mantra from managers before, but never from Yost, so he figured he’d better listen. And while the Royals still fell to the Red Sox 6-1 on Sunday, it’s hard to imagine Duffy — who rebounded from a rough start in his last outing to allow only two runs on five hits in six innings — could have pitched much better.

“This is the best I’ve seen Duffy look in a while,” Royals infielder Mike Moustakas said. “He was in the zone, making pitches when he had to, keeping guys off balance. He gave us a chance to win.”

The Royals didn’t, of course. But a lot of that can be attributed to the performance of Boston’s own left-hander with top-notch stuff, Jon Lester. Lester, 13-6, carried a no-hitter into the fourth and allowed only one run and three hits in six innings as Boston , 77-49, took the finale of a four-game series at Kauffman Stadium.

Yet on this day, the difference between the 27-year-old Lester, a Cy Young candidate a year ago, and the 22-year old Duffy, who dropped to 3-8, wasn’t that wide.

When Duffy departed after the sixth inning, the Royals only trailed 2-0 — an encouraging sign for a rookie who is still feeling his way around the big leagues after he was pounded to the tune of eight runs in three innings in his previous start against the New York Yankees.

Two mistakes in particular cost Duffy. The first came in the fifth inning, when he hung a curve to Boston catcher Jason Varitek, who drove the pitch to right for a triple — his first in almost four years — that gave Boston a 1-0 lead.

The second (and more frustrating) mistake came in the sixth inning, when he wasted a 0-2 count to Darnell McDonald by throwing a 94-mph fastball that caught too much of the plate. McDonald, who entered the game with a .175 batting average and four home runs, muscled the ball to left for a homer that made the score 2-0.

Lester, meanwhile, was cruising. Through six innings, he’d allowed only one hit, a single to catcher Salvador Perez. But after the Red Sox tacked on another run in the seventh against reliever Aaron Crow, the Royals hoped to mount a comeback when rookie Johnny Giavotella led off the bottom of the inning with a triple. Perez followed with a walk, and Lester — who was well over 100 pitches at this point — allowed a RBI single to Moustakas.

With Boston’s lead trimmed to 3-1 and runners on first and second and no outs, Red Sox manager Terry Francona decided to call on his top setup man, hard-throwing right-hander Daniel Bard. And the combination of Bard, who retired the next three batters in order, plus a three-run eighth that made the score 6-1, immediately ended any hopes the Royals had of a comeback.

The defeat was another bitter one for the Royals, who dropped to 52-76 and ended a seven-game homestand against the Yankees and Red Sox with a 2-5 record.

But Duffy, who called the performance “a step forward,” says he will take it as a learning experience. It’s likely he will continue to battle himself, at least until he figures out how to control his aggression on the mound.

But Yost’s message in the first inning Sunday, and the results Duffy found after he listened, showed what can happen when he trusts his defense and doesn’t try to strike out everybody.

“Sometimes less is more,” Duffy said. “I’m going to come at you every start, but I’ve got to learn to ease up a little bit.”

Posted by Bart McClaughry at 8:25 PM