Sorry, I have been gone! 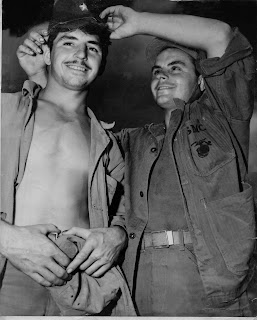 I know this is not a baseball card but this is in memory of my father in-law James Skocy that passed away Tuesday.He is on the Right.
For the first time in almost three years, the Skocy broth­ers. Pfc. Richard L. Skocy 22, and Corp. James A. Skocy both of the ma­rines, met recent on Okinawa. The sons of Mr., and Mrs. Antone Skocy, Route 1, Joliet they had promised their moth­er, a picture of themselves together the first time their paths crossed, so they enlisted the aid of a marine corps combat photographer to record the occasion. .'James is shown trying a.Jap soldier's cap on his brother. Although both participated in the Okinawa fight, it was- not until hostilities had ceased that they met. James, with the headquarters battalion, first marine division, fought at Cape Gloucester and Peleliu, while Richard participated in the landings on New Georgia and Tulagi. He is with the sixth marine division. Both enlisted in the ma­rines in September, 1942, with the Joliet unit. James has been overseas two years and Richard, two and a half years. (Official U. S. Marine Corps photo)
Joliet Illinois Newspaper 1945
Obituary James Anton Skocy SR.

James Skocy, departed naturally from this earth, on September 23, 2008, at the Missouri Veterans Home in Mount Vernon, Missouri.
He is pre-ceded in death by his parents Anton & Juliette Skocy, one sister Juliette Homan, two brothers George & Robert Skocy, the beloved mother of his children Anna Mae (Williamson) Skocy and one son Allen Skocy.

James Anton Skocy Sr. was born January 30, 1922 at Silver Cross Hospital in Joliet Illinois. James served in the Civilian Conservation Corps, the United Stated Marine Corps during WWII and the Korean War. He took the oath to serve his country in the Joliet Township High School with 164 other men from the Joliet community. He served in the 1st Marine Division 9th battalion in New Guiness, Peleliu, Okinawa and Rukyu Islands. After completing his military service James married Anna Mae Williamson and raised twelve children. He worked as a Lead Man at Seneca Petroleum Corporation in Lemont, Illinois until he retired in 1987. James was a life-long member of the Illinois VFW.

Services for James Anton Skocy Sr. will be held at 10:30 A. M. on Saturday September 27, 2008 at the Carlson-Holmquist-Sayles Funeral Home in Joliet with an Interment at Woodlawn Cemetery. The family suggests memorial contributions to Missouri Veterans Home or the Illinois VFW c/o Heuser Funeral Home, PO Box 42, Rich Hill, MO 64779.

Posted by Bart McClaughry at 2:37 PM

Sorry for your loss, Bart

I came across this picture of James Skocy and I love it.I took care of him in his last year of life at the Mo. Veterns home.He was a very specail man.I would love to find more pictures of him in the service.